an online and printed free newspaper, a laboratory where artists, academics and citizens can create collectively a framework for a new antifascism.

The Partisan Cemetery of Mostar. The instrument, the monument, the nostalgia.

The Mostar Partisan Cemetery is one of the most renown monument of the Herzegovina capital and Bosnia Herzegovina in general. It is the work of the architect Bogdan Bogdanović who built several other partisan monuments in Yugoslavia. It is said that before the war that torn Bosnia and Herzegovina apart from 1992 to 1995, Partizansko Groblje was the second most visited place in the city after the Old Bridge. It is represented on almost every pre-war postcard of Mostar.
The cemetery is a park-monument of 5 ha inaugurated on the 25th of September 1965 by Marshall Tito. In his speech, Tito underlined the importance of Mostar in the Liberation Struggle during Second World War : a city where a third of the population is estimated to have joined the Partisans and gave the most national Heroes (13) to the country. After the last war, Partizansko Groblje found itself on the West side of the newly divided Mostar, the side where Croats are the majority of the population. Listed as National Heritage in 2006, the Cemetery is supposed to be protected, restaured, preserved. Instead, it has been abandonned to degradations for years, it is dirty, invaded by vegetation, covered in different graffitis from svastikas to insults to Tito. It is at the center of tensions on the 14th of February, the day marking the liberation of Mostar in 1945. Each year, members of families, partisan’s associations and the Social Democratic Party come to lay wreathes in the cemetery. 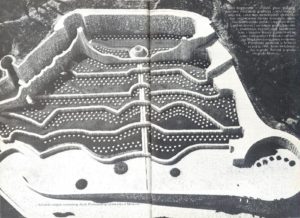 In 2014 the entrance of the cemetery was set on fire, the participants to the ceremony, mainly elderlies, had to walk around the perimeter of the Cemetery, climb little walls to reach the upper part of the Cemetery where wreathes are laid. The place became an object of frustration for some mostarian citizens, most of them engaged in an antifascist group or one of the various NGO’s linked to the Partizans, the Liberation War. When you talk with regular mostarians about Partizansko Groblje, very often, what is first attached to the space is not anti-fascism but the nostalgia for better times, youth, a different social life, the time before the war.
The partisan monuments in Yugoslavia were central tools of yugoslavian memory politics which started to be planned as soon as 1945. Memory politics of the glorification of the anti-fascist struggle, the glorification of the Partisans but also, utimately, the erasure of dissonant narratives of the Second World War and the invisibilisation of non-partisan experiences. In the 60’s, many partisan monuments took the shape of parks, amphitheaters and were often built on the outskirts of urban zones, merging landscapes, suggesting, as Kirn and Burghardt1 explain, that the anti-fascist struggle is a natural process. Partizansko Groblje in Mostar is located on Biskupova Glava, a hill with a soft slope on the western outskirts of the city. The space is vast but well nested in the landscape. One could miss it if you don’t know it’s there.
Since a bit more than a decade, there is a resurgence of interest for these monuments, mainly from photographers. Their works are generally magnifying the monuments and insisting on their impressiveness and solitude, as they are generally located in abandonned spaces. Recently a visual artist staged them as awkward but glorious spaceships in a series which combines photography and light work. The images are amazing although the monuments themselves are emptied of any political content to become exclusively aesthetic objects. The exhibition at New York’s Museum of Modern Art : « Toward a concrete utopia : yugoslav architecture 1948-1980 » has renewed the interest for yugoslav architecture as a whole, housing complexes, monuments, cultural spaces.

The poster of MoMA show representing the Sutjeska

If many were satisfied and happy to see such a worldwide renown cultural institution paying tribute to this architecture, many others expressed anxiety of the possible merchandization of the monuments. One said : « Soon, they’ll make keyrings with the monuments, you’ll see, someone will find a way to make money with this ».
For many mostarians, « Partizansko » was not only a monument. It was also an important socialization space. It was a place for strolling, meeting, spending time together. Exploring websites of Mostar photographic archives, one will find numerous pictures of families, friends, kids. Visiting the cemetery, one will very likely meet with an elderly, walking around, looking at the space incredulously. I always engage in conversation with elderlies, especially in Partizansko. Each of them will always tell you about the pride they had about Partizansko Groblje, how it was a lovely place, how it was clean, how the city was clean « then ». Very often, the person will also, on the tone of the confidence, share with you that Partizansko was one of the best spot for young lovers who had nowhere else to go and that many mostarian babies were conceived there.
When interrogated about the poor condition of the place now, people spontaneously link it to the state of the rest of the post-war city. Although upset with the fascist grafittis, they mainly insist on the loss of a beautiful space where they liked to spend time rather than on the political aspect of its devastation. Even conscious that the destiny of Partizansko and its desertion is the result of the rejection of the « Brotherhood and Unity » times, it is mainly for better times that they mourn. The state of Partizansko bring them « a sense of shame » they say, because now, they « have to live in dirt and ruins ».
While most of the writings concerning Partizansko Groblje focus on the attacks on this Partizan Memorial as an attack on anti-facism, stress the territorial battle between the supposedly anti-fascist East Mostar and the so-called fascist West Mostar, mostarians seem to more underline another aspect of division : how the destruction or damage of pre-war spaces lived as social, be it squares, places or monuments like Partizansko is erasing traces of togetherness, even suggesting, as an old man told me once as a joke,« there is no such a thing as « before war », we dreamt it, our previous lives are in total oblivion ! ». 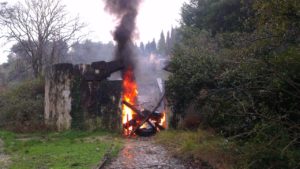 The entrance of Partizansko Groblje set on fire on the 14.02.2014. picture by Aline Cateux

What do you think? Cancel reply